On the Brazilian and Argentine pampas, where the beef comes from, good
animal husbandry and product quality
are still a reality. This argument was unknown for consumers and to an
extent, retail outlets.
The media have presented Swedish meat as “safe and sound” as opposed to foreign products. This was reflected in sales figures for South American meat, poor in relation to potential.
Borgströms outlined a new
positioning to mark out the product
from other market actors. The
campaign turned principally to men who like big steaks since large-volume
meat consumers belong in that group.
Packaging design, print (advertisements, in-store material and recipe brochures) and fair material was developed with the same theme.

SUMMARY
Flodin’s South American meat is now in the major retail chains, as well as in restaurants and institutional kitchens,
and has quickly become an accepted part of Swedish eating habits.
As a result, company sales of beef
have increased by about 30% in the last three years. 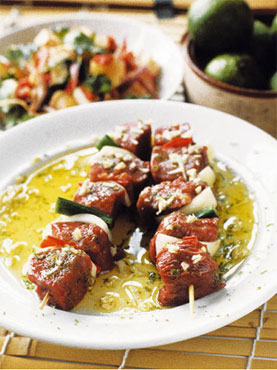